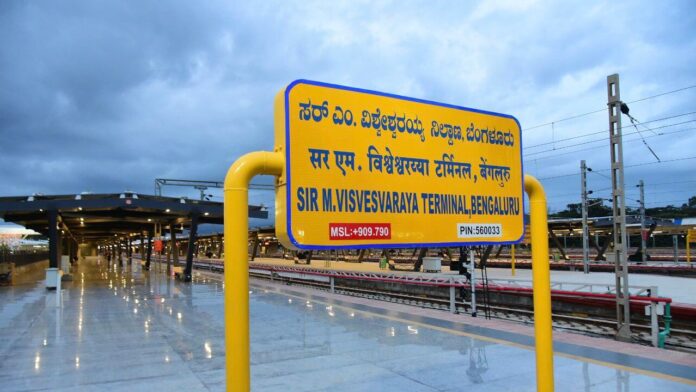 After more than 14 months of its completion, the South Western Railway has decided to run train services at the Sir M Visvesvaraya Terminal in Byappanahalli.

Story so far: Initially, it was supposed to be inaugurated on 15 March 2021 but remained closed as PM Narendra Modi wasn’t available for the ceremony. Even now, the PM seems to have too much on his plate but the terminal will be open for public use. Starting 6 June, trains will begin to run from the terminal.

Stating specifics: Costing over ₹300 crores, the terminal building covers a 4,200 sq.m. area to serve a footfall of 50,000 every day. The aim is to decongest the Krantiveera Sangolli Rayanna (KSR) Railway station in Majestic and Yeshwantpur station. It is also built in the likeness of the Bengaluru airport, making it the first centrally air-conditioned train station in India.

Some hiccups: Last year, the heavy rains of April had resulted in large leaks in the ceiling, which ended up flooding the empty building. The subway connecting two platforms also had thigh-deep water in it. We’ll see how things turn out this time.