🏅 Story of a squash champion 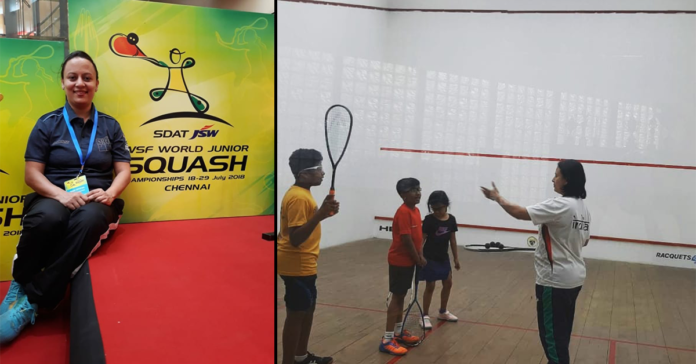 Mekhala Srivastava (née Subedar) is a well-known name in the squash circuit. Having won four national championship titles, she is coaching the next generation of squash enthusiasts in Bengaluru.

Life as a player: Growing up in an Army family, Mekhala used to play sports like hockey and basketball during her schooling. But right after her tenth standard, she took an interest in playing squash, and the rest, as they say, is history.

Once she started winning games regularly, her passion to continue playing squash professionally increased. As squash was relatively unknown in our country at that time, finding the right guidance became a hurdle. So her father became her coach while her mother was the nutritionist.

Her hard work paid off when she won three consecutive national titles from 1997 to 1999 and another title in 2002. After quitting on a high and getting married, she and her husband eventually settled in Bengaluru.

Achievements: Apart from winning four national championships, Mekhala was recommended for the prestigious Arjuna award in 2002 and 2003. She also entered the Limca Book of Records for having won the most number of competitions in India.

Life as a coach: Mekhala enjoys coaching the new generation of players. She has also been on the coaching staff of the national team on several occasions.

Academy: Mekhala runs her own coaching academy named MS Squash at the Dayananda Sagar Institutions premises at Kumaraswamy Layout. Apart from the college students, even outsiders can train in her academy. She trains players (both children and adults) in the mornings (6 am to 7.30 am) and the evenings (5 pm to 7.30 pm) every day except on Sundays.

Hopes for the future: Mekhala wants squash to be a part of the Olympics. She believes India has a definite chance of winning medals, considering the strength of the current crop of players like Joshna Chinappa and Dipika Pallikal.